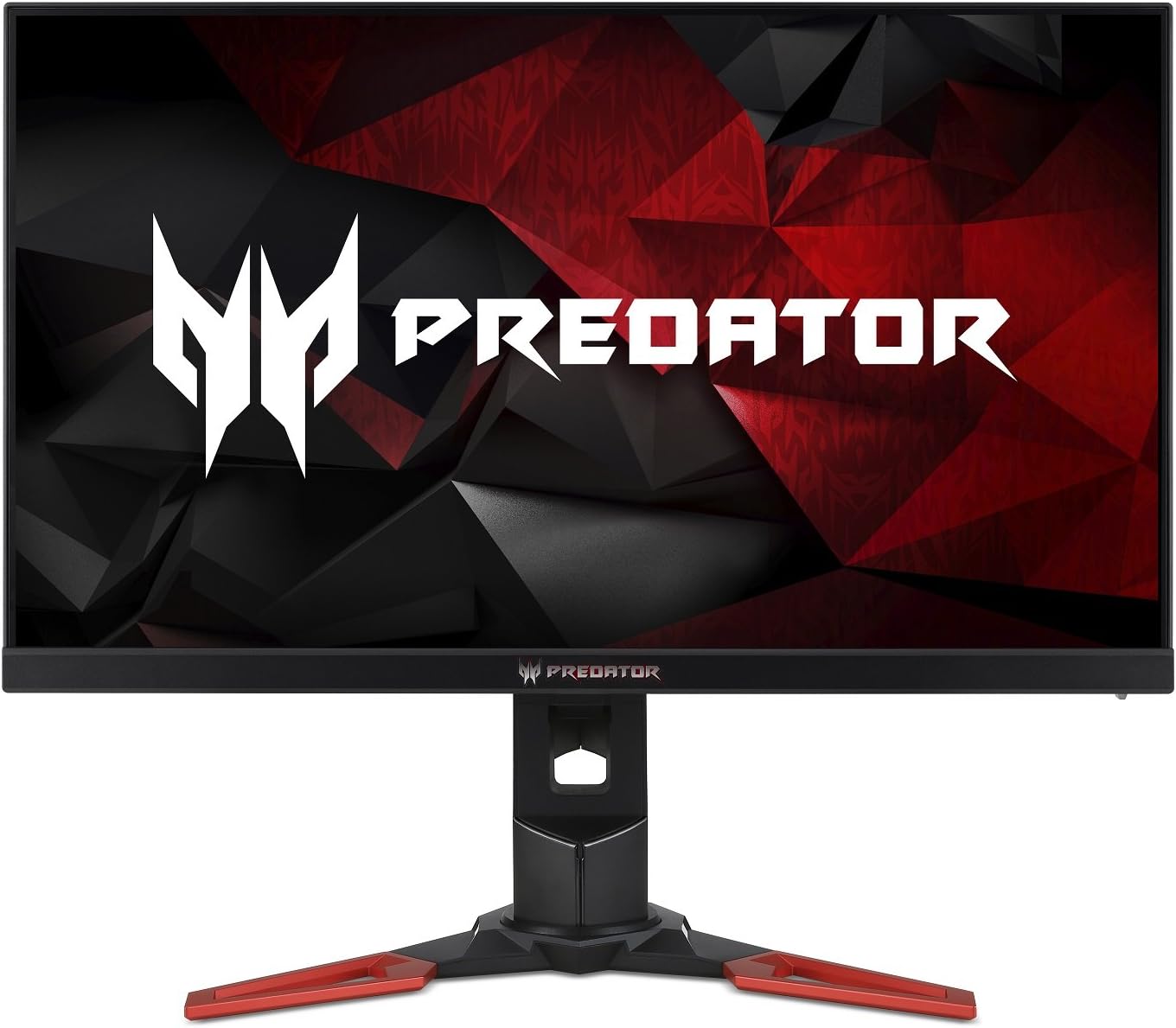 The XB271HK has what you need if you like playing games like World of Warcraft, The Elder Scrolls or Fallout. Games with big, beautiful worlds where you don’t need the 144hz experience will benefit the most out of this monitor. If you need 144hz, you should stop looking at 4K monitors. It shares problems with its siblings like the bad menu and few connection ports.

Gaming in 4K is getting easier and cheaper. More graphics card can support the resolution and many of the monitors that are released now are 4K compatible. But some of the manufacturers was early, like Acer. The Acer Predator XB271HR is not the newest monitor, but it’s something to consider.

Yes, it doesn’t share the best feature, 144Hz refresh rate, with its bigger brother, the Predator X27, but they also don’t share the price. What this monitor do well, is to make you enjoy games for hours, days, months and years to come. Continue reading the full review to find out why.

This is an ultra-high definition monitor that features an incredible 27” monitor with a very solid base that is typical of Acer monitors. Just like other Predator models, this one features a solid base with two bright red legs from the bottom. They are large enough to offset the monitor and prevent it from being top-heavy but are not so big that they will take up too much space on your desk.

The display is 3840 x 2160 with a 16:9 aspect ratio. It is a 4K monitor, and due to current restrictions, this means that you won’t be able to enjoy a refresh rate that is any higher than 60 Hz. The good thing is that this monitor offers G-Sync, and this can be used to provide a surprisingly smooth gaming experience even at this lower refresh rate. It has very low lag and surprisingly fluid performance, especially when paired with a 1080 Ti or similar card.

With a brightness of 300 Nit, and a 4ms response time on the IPS panel, this monitor has a lot of middle-of-the-road features, but there are a few surprises that serve to help set it apart from other options on the market.

With the stand, the monitor weighs 15.4 pounds, making it a little lighter than some others on the market. It is 24.2” tall by 21.7” wide and 10.6” deep. Since the monitor can easily tilt from -5 degrees to -35 degrees, rotate up to 90 degrees, and be raised vertically up to 5”, it’s easy to set the monitor to your specifications. Unlike some other Predator monitors, the Acer Predator XB271HK also swivels from side to side.

Such as other Predator monitors, the Acer Predator XB271HK features a discrete logo on the bottom of the monitor and very thin bezels all the way around the display. I wish they would remove the logo or make it cleaner, this “gamery” look doesn’t look good in my opinion.

The stand has the traditional big red feet, but the stand itself is an attractive black. It’s thick enough to prevent the monitor from wobbling during intense gaming sessions, but not so large that it looks obtrusive or out of place.

Because of how thin the monitor itself is, it won’t look out of place on a smaller gaming desk. It looks very similar to other Predator monitors and it may be very difficult for some people to tell them apart.

While the Acer Predator XB271HK may look very similar to other Predator gaming models, its performance is where it really shines. It offers an incredible four-millisecond pixel response, which delivers fast and crisp movement and motion. What this means is that even during fast-paced games, gamers won’t have to deal with a lot of blurs. To really get the best image from this monitor, you will want to have the G-Sync enabled, as this will greatly speed up the monitor, decrease lag, and do away with blur.

The monitor has very low input lag, which is the time that it takes for the monitor to react when the gamer enters a command. This means that you can easily get ahead of an opponent and they very likely won’t see you coming. Although the input lag is lower than a lot of gaming monitors, there are still some that are a little faster.

There is absolutely no screen tearing on this Predator, thanks to the fully integrated G-Sync, which really helps improve the quality of games and movies even though this monitor has such a low refresh rate. Priced a little higher than other similar options, the Acer Predator XB271HK is sure to give you all of the speed and high-quality graphics that you want when playing a fully immersive game.

The navigation on the settings menu is not that great, which can make it frustrating to switch settings. It’s great that the Acer Predator XB271HK makes it easy to switch over to Game Mode, but it takes a lot of selections to change any settings, which can be a bit of a pain.

The color accuracy on the Acer Predator XB271HK is incredibly impressive. All red, blue, and green colors are closely aligned with the ideal colors, which means that they are surprisingly vibrant and don’t have a lot of tinting or any skewed tones. This is exactly what gamers want when they purchase a high-quality monitor and even goes above and beyond what most people need, making this a great option for creative uses.

Thanks to the color accuracy, this monitor is a great choice for any gamer craving realistic gameplay and scores much higher than other similar monitors. Part of the great color reproduction is due in part to the IPS. One problem that some gamers may notice is that when playing older games there may be an issue with UI scaling and texture detail. The best way to combat this problem is to use a lower resolution for that particular game.

The brightness is 300 cd/m ² which is a little lower than some other monitors, but still great for a 27” 4K option. It does a pretty good job living up to this number, resulting in a very bright monitor that is easy to see and use.

The Acer Predator XB271HK only has two video ports. There is an HDMI input, as well as a DisplayPort input. They are both located on the back of the monitor. Additionally, it features two downstream USB 3.0 ports, one upstream USB 3.0 port, and a headphone jack. On the left side of the monitor are two more USB 3.0 ports. These two additional ports are really handy and make it easy to plug in USB sticks or other peripherals that you may want to use.

Like a lot of similar gaming monitors, the speakers on the Acer Predator XB271HK are nothing impressive and don’t have enough bass to produce a full and even sound. This is unfortunate, as it means that the sound often is tinny, but is simply a great excuse to invest in a good pair of headphones instead. They are two-Watt speakers, but really don’t provide the power that you want from such a high-quality monitor.

The image of the monitor is amazing. Once you go 4K, you’ll never go back to anything else.

The design is good, I just wished they the logo was more clean than it is. But small bezels is a plus.

For MMOs and other non-FPS genres, the performance is great. For FPS, it’s not.

Playing games where the frames don’t matter as much, as MMOs like Diablo, this monitor makes sense. It has a gorgeous 4K display that will show you the surroundings and the open world that you play in. Acer has managed to configure the colors very good and the monitor is joyful to watch.

Of course, things can always be better. The menu on the monitor is not fun to deal with and changing modes is not easy. The design is also very individual, but I would like to see a simple Acer -logo or something instead of that Predator-logo. At least it doesn’t light up…

Christoffer is the man behind Gaming Simplified. He has been an avid gamer and Tech lover and that has motivated him to share All Things Tech on this blog!

If you are wondering how you can watch Paramount Network on Firestick, you can stop your search immediately as I'm going to show you a step-by-step guide to do that quickly. So, How to Watch...

Eye Strain is a common problem when using a computer monitor for a long time. Monitor manufacturers have also realized this issue and are taking active measures to tackle it. Hence why, many...

Hey there, my name is Christoffer and I am the founder of Gaming Simplified. I have been into computer games since my childhood and this blog is an extension of that passion!

Here at Gaming Simplified, me and my team strive to solve all sorts of issues and problems with your computer and try to present the solution in an easy to do way.

Gamingsimplified.com Is a Participant in the Amazon Services Llc Associates Program, an Affiliate Advertising Program Designed to Provide a Means for Sites to Earn Advertising Fees by Advertising and Linking to Amazon.com. Amazon, the Amazon Logo, Amazonsupply, and the Amazonsupply Logo Are Trademarks of Amazon.com, Inc. Or Its Affiliates. As an Amazon Associate We Earn Affiliate Commissions From Qualifying Purchases.