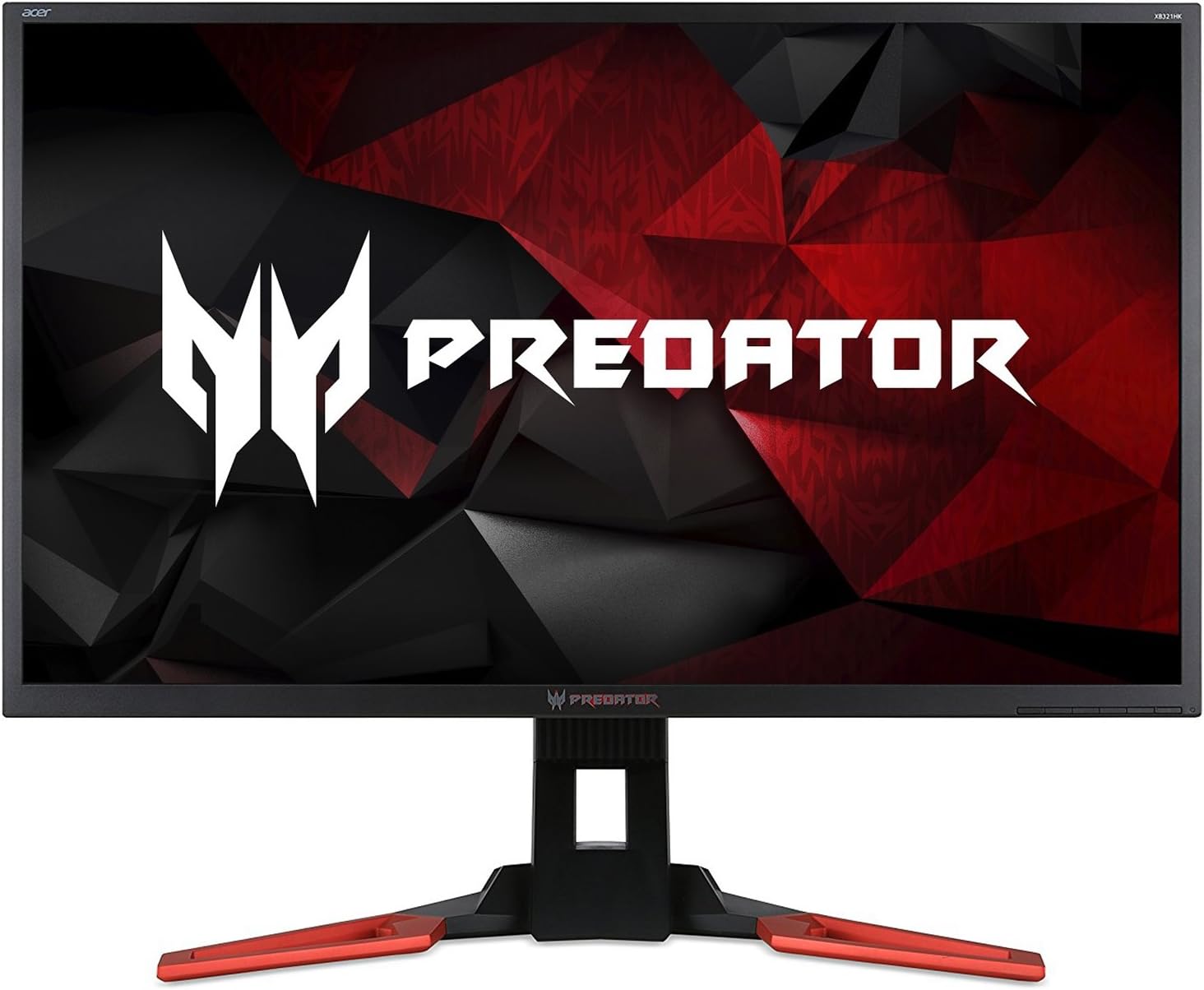 While the XB321HK from Acer is an expensive monitor but I can’t help but feel it’s worth it. The lack of ports is pure laziness from Acer’s side but playing games on a 4K monitor with G-Sync enabled is a beauty. The image is crisp, the gameplay is smooth and the IPS is colorful. There is no doubt that the Predator XB321HK is the best 4K gaming monitor right now.

As we all know, 4K is the new cool and there are many manufacturers that are jumping on that train. The problem is that 4K is so big, that you have to use the scaling functions in Windows to see anything. What’s good with that? The simple solution is to go with a bigger monitor. And bigger monitor we will do. Acer brings the Predator XB321HK, a 32”-inch 4K monitor with G-Sync to the table. Is this your next monitor? Let’s find out.

Do you remember 10 years ago when people purchased HUGE 32”-inch TVs and the image was absurdly big? Yeah, that’s how big the Predator XB321HK is. 32” is not something that most people will be able to handle on their desks. Since the monitor is so big, it requires some hefty feet to keep it steady. It uses the same base as the Predator-models with two red legs going out in the bottom. These are, of course, bigger than usual to help the balance of the monitor.

The display itself is 3840×2160 (4K) with a 16:9 aspect ratio. The sad part with 4K is the refresh rate, which is only 60Hz which may sometime cause screen flickering. We are still not in a place where 4K and 144Hz can work together in the same monitor. On the other hand, the monitor does support G-Sync, so you should get a smoother experience from that. It will also help with screen tearing and other nasty stuff that we don’t want to see when playing games.

It has a contrast ratio of 1,000:1 and brightness at 350cd/m² which help bright colors look brighter, while the darks will look even darker. It is nowhere near HDR, which is not featured on the XB321HK but it’s good, more on that later. The response time for the IPS panel is 4ms grey-to grey, which is the normal response time for this type of panel, measuring how quickly a pixel can display a change from one shade of gray to another.

As I am sure you know by now, the Predator XB321HK feature a 32” panel. It measures 29.1 inches (74cm) wide and 12.2 inches (31cm) deep with the stand. The monitor has an adjustable height of 4.7 inches (12cm) and can be tilted 5 degrees forward and 25 degrees backward. Unfortunately, there is no swivel on the monitor if that is something you were looking for. However, the monitor has a VESA mount on the back that follows the standard 100X100 so it’s possible to change the stand for another one or wall-mount the monitor.

The monitor follows the same design as all the other monitors in the Predator-lineup. The thin bezels around the display and the Predator-logo in the middle of the bottom bezel are discrete and I like that we are moving away from huge bezels. The stand itself has a black front while being silver on the sides and the feet are big and red. The stand itself is made of metal and it should have no problem to keep this monitor steady during gaming sessions.

Because of the size, there is some weight to the monitor. It weighs a massive 25 pounds (11.3kg) so if you are switching the stand for an arm, you might want to look at the max weight for the arm.

This is where the Predator XB321HK shine the most. 4K is a really high resolution and games that are optimized for it look stunning on this monitor. The big size and the high resolution together is really intimidating and if you are like me and like playing open-world-games, the XB321HK is great. Playing a game like GTA V with high settings and 4k textures really give you another feeling of the game.

Other games, such as Overwatch or Battlefield, was an epic experience. Battlefield is a very dark game and I felt that the monitor wasn’t justified for just that type of game. Don’t get me wrong, the game itself looked great but Battlefield looks great on a lot of monitors. There aren’t really many colors in that game.

However, there is something else with Overwatch. Overwatch is a bright game with lots of colors. Here, the XB321HK was a masterpiece. The contrast and accuracy of the colors were fantastic. Because of the 4K resolution, everything was sharp and detailed, and Winston’s Banana-skin was bright and yellow.

While playing, I hardly noticed any input lag at all. Acer has done a good job at reducing the input lag on the monitor and everything felt smooth. This could of course also be because of G-Sync. For this high resolution, G-Sync is a godsend since it will help with the lag and screen tearing. Even my Asus GTX 1080 Ti Strix will have FPS drops but they were nowhere as noticeable with G-Sync on.

The monitor is stuck at 60Hz and that can be noticeable, especially in more fast-paced games as Overwatch or Battlefield. It is something that we have to live with since there is (as of writing this) no monitors that can handle both 4K and 144Hz. This makes G-Sync even more important as it will help reduce the lag and increase the smoothness.

The Predator XB321HK is a bright monitor, there is no doubt about it. According to the specifications from Acer, the monitor has a maximum brightness of 350cd/m² which is a lot for a 32” 4K monitor. However, in most tests, the monitor doesn’t live up to those numbers and they are instead closer to 340cd/m² which is still really good in my book. This I just above the ViewSonic XG2700-4K which is one of the brightness 4K monitors on the market.

When it comes to colors, Acer has done a good job with the XB321HK. It managed to reproduce 103% of the sRGB color spectrum while it managed 76% for the AdobeRGB. The results are good and expected. Having the extra 3% in the sRGB will make very little difference in games, which this monitor is mainly for.

I am not sure what Acer thought of when they decided on the connections for this monitor. The ports on the back of the monitor are very short. You can find a DisplayPort 1.2 and an HDMI 1.4. That’s it for video connections. I can feel that Acer was a little cheap here, one more DP would have been nice. At least there is one for a computer and one for a console.

On the other hand, there is also a USB-hub on the back. Here, you can find two USB 3.0 ports and one USB 3.0 B-port for connecting to the computer. There are also another two USB 3.0 ports on the side of the monitor where you can plug in your peripherals or USB sticks. A nice little feature to have.

4K resolution, IPS Panel and a high brightness. This is how a game should look.

I can live without the “gamer”-design but VESA mount and steady base is good to see.

It doesn’t get better than this right now. But there is no 10 without high refresh rate.

This is an expensive monitor, no one is going to question that. However, it is unique and is one of the very few 32” monitors with G-Sync and 4K. Playing games on this monitor is very nice and the colors that are shown on the display look sharp and accurate. It’s good that the monitor has G-Sync built-in because it makes gaming in 4K much smoother.

If you are not ready to spend the money for this monitor, the before mentioned ViewSonic XG2700-4K is a good monitor with a price that is far less than the XB321HK. Of course, you don’t get the same premium feel and features as with the XB321HK, but it may be enough for you. Another alternative is Acer’s own XB271Hk, which is a smaller version of this monitor at 27”. It still offers 4K and G-Sync.

But if you have a GTX 1080 Ti (or better) and want to play games in 4K resolution, the Predator XB321HK is a good alternative. It’s big and steady and is a dream to play games on. The only thing left for me is to get better at Overwatch…

Christoffer is the man behind Gaming Simplified. He has been an avid gamer and Tech lover and that has motivated him to share All Things Tech on this blog!

If you want to show your presentation to your colleagues or mirror any other content from your iPhone to Firestick and don't know how you can do that, don't worry. I'm here to help you in this...

Watching sports on a big screen via Firestick is always fun and If you don't know how to watch SEC Network on your Firestick, stay with me for a few minutes and you'll be able to watch it. So, How...

Hey there, my name is Christoffer and I am the founder of Gaming Simplified. I have been into computer games since my childhood and this blog is an extension of that passion!

Here at Gaming Simplified, me and my team strive to solve all sorts of issues and problems with your computer and try to present the solution in an easy to do way.

Gamingsimplified.com Is a Participant in the Amazon Services Llc Associates Program, an Affiliate Advertising Program Designed to Provide a Means for Sites to Earn Advertising Fees by Advertising and Linking to Amazon.com. Amazon, the Amazon Logo, Amazonsupply, and the Amazonsupply Logo Are Trademarks of Amazon.com, Inc. Or Its Affiliates. As an Amazon Associate We Earn Affiliate Commissions From Qualifying Purchases.